I  OUR LADY OF FATIMA

OUR LADY OF FATIMA
THE REQUESTS OF OUR LADY OF FATIMA TO BRING PEACE TO WORLD
ARE YOU DOING WHAT OUR LADY OF FATIMA ASKED YOU TO DO WHILE THERE IS TIME?
1. Are you offering your daily tasks as a sacrifice in reparation ?
2. Are you saying the Rosary every day ?
3. Are you wearing your Brown Scapular a sign of personal consecration and making acts of consecration to the Immaculate Heart of Mary ?
4. Are you fulfilling Our Lady's First Saturdays communion request ?
5. Are you making at least an hour of adoration once a week, conforming to Our Lady's request for penance, sacrifice, an reparation: just as the Angel at Fatima instructed the children, prostrating himself before the Blessed Sacrament, to pray for those who do adore who do not adore ! Everybody owes God adoration even little children !
'O my God, I believe, I adore, I hope, and I love Thee. I ask pardon for those who do not believe, do not adore, do not hope and do not love Thee.'
OUR LADY OF FATIMA SAID IN 1917
1. FASHIONS: "Certain fashions will be introduced that will offend my Son very much"
2. HELL: "More souls go to hell because of sins of the flesh than any other reason "  (Sins against the 6th Commandment.')
3. BAD MARRIAGES: 'Many marriages are not good; they do not please Our Lord and are not of God.'
4. PUNISHMENT: 'The Blessed Mother can no longer restrain the Hand of Her Divine Son from striking the world with just punishment for its many crimes.'
5. FIVE WARNINGS: " If my requests are not granted, Russia will scatter her errors throughout the world, provoking wars and persecutions of the Church. The good will be martyred, the Holy Father will have much to suffer, and various nations destroyed !"
(Remember, Our Lady told us in 1917)
6. AMEND: 'I have come to warn you the faithful to Amend their lives and ask pardon for their sins. They must not continue to offend Our Lord Who is already deeply offended.
7. ROSARY: 'Say the Rosary every day, to obtain peace for the world. Add after every prayer  "Oh my Jesus, forgive us our sins, save us from the fires of hell, and lead all souls to heaven, especially in most need of Thy mercy'.
8. PRAY: 'Pray. Pray, a great deal, and make sacrifices for sinners, for many souls go to hell because they have no one to make sacrifices and pray for them.'
9. IMMACULATE HEART DEVOTION:' God wishes to establish in the world the devotion to My Immaculate Heart: If people do what I tell you, many souls will be saved and there will be peace .'
10. WORLD PEACE:'Tell everybody that God gives graces through the Immaculate Heart of Mary. Tell them to ask graces from her, and that the Heart of Jesus wishes to be venerated together with the Immaculate Heart of Mary, for the Lord has confided the peace of the world to her.'
11. WAR: 'War is a punishment from God for sins.'
12. FINAL PEACE: 'In the end My Immaculate Heart will triumph, Russia will be converted and there will be peace.'
13. 1st SATURDAY DEVOTION: 'I promise to help at the hour of death, with graces needed for salvation, those who, for 5 consecutive months, shall confess and receive Holy Communion, recite 5 decades of the Rosary, and keep me company for 15 minutes while meditating on the mysteries of the Rosary with the intention for making reparation to my Immaculate Heart.'
14. SACRIFICE: Our Lord appeared to Sister Lucy in 1943. He complained bitterly and sorrowfully that there are few souls fulfilling Our Lady's request saying: "The sacrifice required of every person is in fulfillment of his duties in life and the observance of My Laws! This is the penance I now now seek and require !"
15. ST. JOSEPH: (The Only Saint who appeared in Fatima besides Our Lady. St. Joseph held the child Jesus in his arms and blessed the 70,000 people three times. It is he of whom it has been said when the faithful recognize the sanctity of St. Joseph.')
PARDON PRAYER - 1917
'MOST HOLY TRINITY--Father, Son, and Holy Ghost -I adore thee profoundly. I offer the most precious Body and Blood, soul and Divinity of Jesus Christ , present in all the Holy Tabernacles of the world, in reparation for the outrages, sacrileges and indifferences whereby He is offended. and through the infinite merits of His Most Sacred Heart and the Immaculate Heart of Mary, I beg of Thee the conversion of poor sinners.' 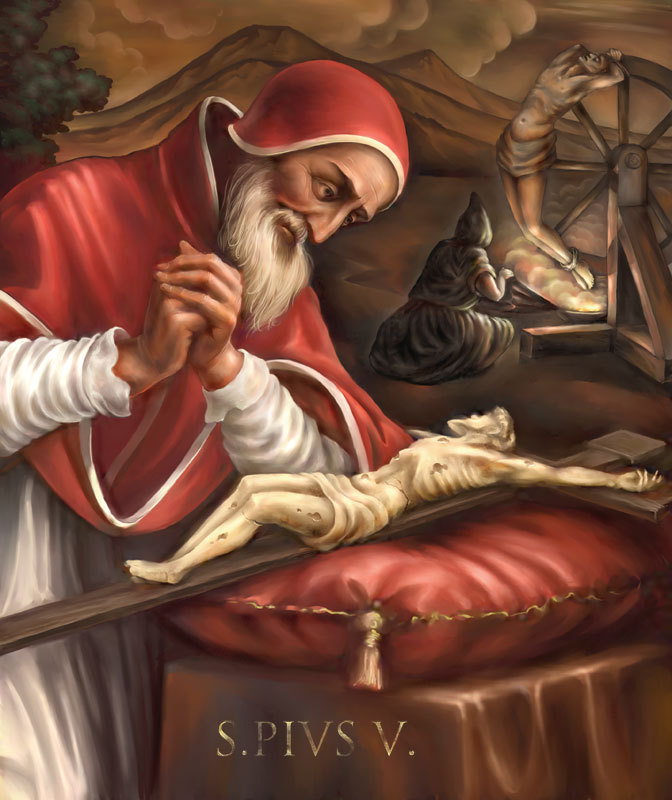 PRAYER FOR THE UNIVERSAL RESTORATION  OF THE ROMAN RITE MASS AND LITURGY;

O God, who didst choose Blessed Pius V as supreme Pontiff in order to shatter the enemies of Thy Church and to restore the sacred liturgy, grant us his protection so that, cleaving to Thy service, we may overcome the snares of all our enemies and enjoy perpetual peace. Through Jesus Christ, our Lord. Amen.

St. Pius V pray for us; Protect the Roman Liturgy

(From Mass of Feast of St. Pius)

In July 1570, during a period of widespread attack upon the Mass , Pope St. Pius V issued a decree Quo Primum which ordered that the Tridentine Mass be regarded as solemn through the Catholic World in "Perpetuity." So that it was printed in all altar missals which were used right up until the New Order was introduced. Quo Primum states in part:

Specifically do we warn all persons in authority of whatever dignity or rank, Cardinals not excluded, and command them as a matter of strict obedience, never to use or permit any ceremonies or Mass prayers others than the one contained in this Missal. At no time in the future can a Priest whether secular order or priest, ever to be forced to use another way of saying Mass.

And in order once and for all to preclude any scruples of conscience and fear of ecclesiastical penalties and censures, we declare herewith that it is by virtue of our Apostolic authority that we decree and prescribe that this present order and decree of ours is to last in perpetuity, and never at a future date can it be revoked or amended legally. And if, nevertheless, anyone would dare attempt any action contrary to this order of ours, handed down for all time, let him know that he has incurred the wrath of Almighty God, and of the Blessed Apostles Peter and Paul.

CHARACTERISTICS of the CHURCH The four properties of:

The four properties of Unity, Sanctity, Catholicity and Apostolicity are easily recognisable, and are not merely properties of being, but at the same time, outer marks of the true Church of Christ.  The Holy Office, under Pius IX (1864), declared: "The True Church of Christ by virtue of Divine authority, is constituted and is knowable by the four characteristics, which we confess the Creed as an object of the Faith" (D1686; of (1793).

I. The Church founded by Christ is unique and One. (De fide)

In the Nicene Creed the Church confesses: Credo in...Ecclisiam. (D 86.)

The Vatican Council I teaches: "in order that the whole host of the faithful may remain in in unity of Faith and communion (in fidei et communions unitate) He placed St. Peter over the other Apostles and insituated in him both a perpetual principle of unity and a visible foundation" (D86). In the Encyclical "Satis cognitum," which "ex professo" treat of the unity of the Church, Leo XIII comments: "as her Divine Founder that the Church should be in one faith, in government and in communion. He pointed Peter and his successors to be its foundation and, as it were, the center of its unity."

II. The Church founded by Christ is Holy. (De fide)

In the Apostles Creed the Church confesses: Credo in ...sanctam Ecclesiam ( D 2).

The Vatican Council I imputes to the Church: " a preeminent sanctity and an inexhaustible fruitless in all good things" (D 1794). Pius XII comments in the Encyclical "Mystici Corporis" : "Certainly our holy Mother shows herself with out stain in the Sacraments with which she begets and nurtures her children; in the faith which she preserves ever inviolate; in the holy laws which she imposes on all and in the evangelical councils by which she admonishes; and finally, in the heavenly gifts and miraculous powers by which out of her inexhaustible fecundity she begets countless host of martyrs, virgins, and confessors.

III. The Church founded by Christ is Catholic (De fide)

Moral Catholicity suffices for the concept of Catholicity. Nevertheless it is Christ's will that the Church constantly endeavor to extend. The ideal towards which the Church strives is physical Catholicity. According to the established view of the majority of theologians, moral Catholicity demands that the Church extend over the whole earth simultaneously. Thus after a certain time of development this moral Catholicity will be realized and from that time on is to be perpetuated. The wide extension and the great number of the faithful do not indeed of themselves constitute a proof of the truth of a teachingerror also can achieve wide extension; nevertheless Catholicity is a quality which, according to the will of her Founder, shall not be lacking in the teaching of Christ, and it is therefore a characteristic of the true Church of Christ.

IV. The Church founded by Christ is Apostolic. (De fide)

1. What a Christian is: and of the blessed Trinity
2. Faith explained
3. The Creed expounded in twelve Articles
4. Hope and Prayer explained
5. The Pater Noster, or our Lord's Prayer expounded
6. The Hail Mary, or Angelical Salutation expounded
7. Charity expounded
8. Of the Commandments in general,